Float fishing is probably one of the easiest way for new steelhead fishermen to learn. It is similar to bobber fishing for trout, except you use a unbreakable float instead of a plastic red and white bobber. Floats come in many shapes and sizes. The size of your float should be just big enough to float your bait/lure with out sinking so fish don't detect the float.  In clear water use a clear float or a natural cork float. Float fishing is a very effective method in calm pools, and boulder strewn rivers. Without float fishing in your arsenal you may be missing some very good opportunities to catch more fish. 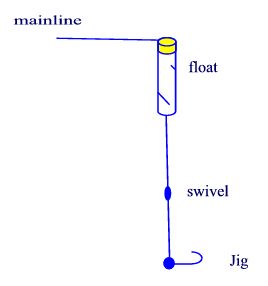 Presentation for Dead Drifting a jig

Floats come in many shapes and sizes. The size of your float should be just big enough to float your bait/lure with out sinking so fish don't detect the float. A float should ride the surface naturally occasionally stuttering as the bait/lure hits a rock. You can cast a float farther upstream than a drift fishing approach since the float will keep the line from going around rocks. As a float comes down stream reel up the slack, and as it goes down stream free spool with just enough tension not to disturb the float but enough to set the hook immediately. Keep your line off the surface of the water so it doesn't drag the float.  It is extremely important not to drag the float which will cause the bait to rise off the bottom out of the strike zone. Always use sticky sharp hooks. Let me repeat that always use sticky sharp hooks.

If you have a tail out you would like to cover with your float you  can increase your leader length so it is longer than it is deep and hold back pressure against the float so it pulls the jig off the bottom and works it way back to shore.

The float will just go down... SET THE HOOK!!!  Your line should be tight and rod should be ready to strike.

Most float fishermen use a fixed float with about 4-9 feet of line to the bait/lure. The float should be placed on the main line with the swivel between the float and the bait.  The distance below the float to the bait should be adjusted so the bait is just above the bottom. Fixed floats are difficult to cast with a bait casting reel. It is far easier to use a spinning rod to cast the float and jig. Above are two different types of floats. The foam ones on the right are commonly called dinks and the line is inserted through a tube on the top, then wrapped around the foam and reinserted into a tube on the bottom. The leader distance can be adjusted very quickly to meet the fishing situation with this style of float. It also supports a heavier weight setup. The Balsa floats on the right can be rigged as  solid or sliding depending on your fishing style. To make them fixed just  thread two surgical pieces on the line and pull over the ends of the float. The balsa stemmed float can also be fished with one piece of tubing and a piece of lead inserted in tubing make casting easier.

Another easy way to use the a fixed float on a sliding clear bobber is to place tiny split shot above and below the bobber. Be careful not to crimp the split shot to hard so your line doesn't become damaged.

With a sliding float the line goes thought the float and stops sliding by hitting a stopper on the main line. With this style of rigging it is easier to cast your lure with a bait casting reel. Generally a sliding float is fished with a casting  reel, but can be also used on a spinning setup. Float stops can be place above and below the float. The top one is to set the depth and the bottom one is in case you break your main line so you can get the float back.

The distance below the float to the bait should be adjusted so the bait is just above the bottom.  If the float hangs up going down the hole, shorten the leader by six inches at a time until it doesn't hang up. If it never touches bottom lengthen the leader another six inches until the bait just touches bottom, then shorten by six inches so its just off the bottom. Fish have good upwards vision and will rise to take the jig/bait when suspended during warm water temperature months.

If you are a dedicated float fishermen you should use a main line that will float on the surface so you can mend the line. Braided lines work well for this purpose or you can use dry fly line dressing to help keep the line from sinking. A small film container with a small cloth soaked in Mucillin will allow you to coat your line on the retrieve quickly at the start of the day.

Barrel Swivels are used to attach a lighter leader to a heavier main line. This allows you to quickly adjust your rig to water conditions & minimize loss to snags. To avoid float loss, make sure float is attached to the main line above the swivel. A dropper fly can be added on a short leader for extra attraction. (check regulations before adding second lure)

You should always use a leader of a lighter strength below your float so you don't lose your float when your lure breaks off. Leader length should be at least 18 inches to  the swivel.  During the summer you can go as light as 4# test with the right setup and successfully land steelhead. During the winter 20# test leaders can be used in colored water when chasing Trophy class steelhead.

All kinds of setups can be placed below the float. A jig can be used with bait and without. You can use a drift fishing rigging below a float using back pressure to fish tail outs or just to cover water that tends to be to snaggy to drift fish. Soft plastics are also a favorite used on jigs and with out. Soft plastics can be used in worm, egg cluster and single egg presentations. All of these methods can be combined in one way or another to meet almost any situation. Straight bait such as eggs, sand shrimp or night crawlers can be extremely effective when presented in the correct manner. In extremely clear water you may even give single eggs a try.